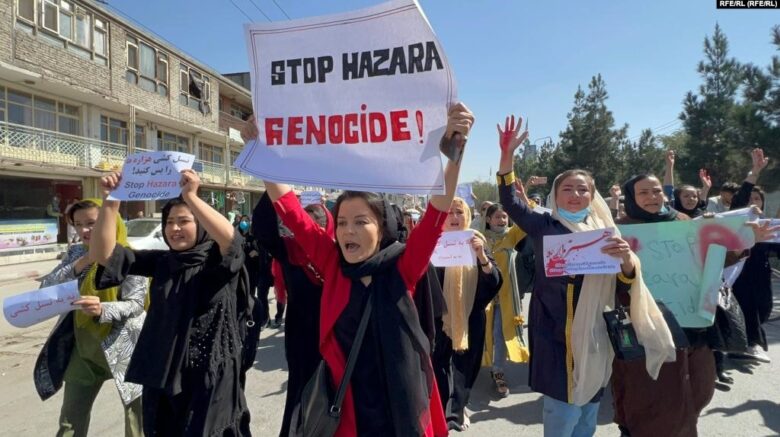 Protesters march against the recent attack in Kabul on October 1. Photo by RFE/RL.

On September 30, 2022, a suicide bombing took place at the Kaaj education center in Kabul killing at least 53 students and wounding more than 100 people, most of them young female students.

The area where the education center is located is dominated by Hazaras, a historically targeted ethnic minority in Afghanistan. At school, the new protocols installed by the Taliban called for dividing the classrooms into two sides for boys and girls–the bomber targeted the girl’s section. In Afghanistan, especially after the Taliban government took over, women and girls are at an increased risk of persecution, especially if they come from an ethnic minority or resist the strict protocols imposed by extremist groups.

We at Asylum Access are furious. The murder of these bright, young women is a tragic loss for their families, communities, and Afghanistan’s future. This attack also comes as the latest painful event for the Hazara diaspora, displaced within and outside the country by decades of oppression. In times of terrible conflict and societal upheaval, tragic events like these can feel all too common, but that doesn’t make them any less traumatic or heartbreaking. We grieve with our friends, colleagues, clients, and partners affected by this tragedy.

This bombing is unfortunately the latest of a series of attacks on ethnic minorities in Afghanistan. These attacks appear more organized and targeted specifically at girls’ education, instilling a fear of sending girls to school among many families. Additionally, when women took to the streets to protest, many were arrested arbitrarily and prosecuted. We honor the bravery of the women of Afghanistan who continue to fight for their collective autonomy, education, and safety.

In response to the attack and the violence that protestors faced in Afghanistan, there are ongoing worldwide protests in more than 100 cities worldwide to condemn what is happening. The hashtag #StopHazaraGenocide on Twitter reached almost 10 million users in the past week. The Hazara community in Malaysia joined the worldwide protests on the 9th of October and is going to have a vigil on Saturday night in their own community in Ampang.

Watching this tragedy unfolds is a reminder that in many parts of the world, access to human rights such as freedom of speech or education can cost someone their life or the life of those they love. As much as we admire these women and young girls’ courage, we need to ensure that our sector is providing them with protection and that they are welcome to live safely elsewhere if forced to flee.

Being forced to leave your home and potentially your family behind comes from a legitimate fear for your safety and circumstances that are becoming truly unbearable. The right to pursue a safer life elsewhere is a fundamental human right that everyone should have access to.

Unfortunately, the factors forcing people to flee their homes in search of safety are not disappearing anytime soon. Especially in today’s world where climate change, natural disasters, and violent conflict are on the rise, more people are expected to be displaced.

Therefore, the different actors in the forced displacement sector, especially those who are mandated to protect refugees, such as the UNHCR, governments, and international aid agencies, need to have a proactive approach and should be prepared to take quick actions to ensure the protection of refugees who are escaping and those who are in limbo. Having a reactive approach and bureaucratic processes to welcoming refugees and resettling them can cause delays that have a fatal impact. Many forcibly displaced people, especially those fleeing ethnic or violent conflict, might face retaliation as they wait for an administrative process to occur. This makes the system that is supposed to protect people become the reason behind their additional suffering.

That is why at Asylum Access, our work is grounded in continuing to demand access to human rights for forcibly displaced people wherever they find themselves and regardless of the reason behind their forced displacement. We will continue to support people to be welcome in their new countries and build a global society where their voices are heard and valued, and everyone has a fair chance to build the life they deserve with dignity.