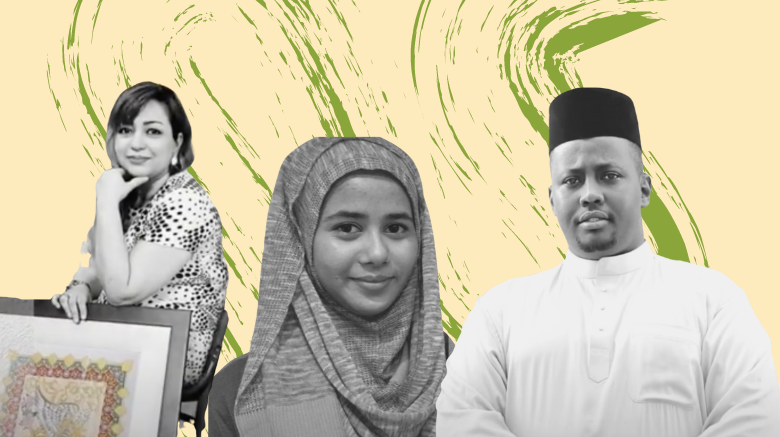 Many forcibly displaced people are prevented from working in the countries to which they’ve fled due to legal or other systemic barriers. We are proud to amplify the stories of six leaders who, through innovation and resourcefulness, challenged these barriers and generated new ways to create a viable livelihood.

After being forced out of her home in Myanmar and resettling in Malaysia as a child, Sharifah Shakirah wasn’t granted access to education like most people her age. As a result, she mobilized and began fundraising to open a school for women and girls in her community. Rohingya Women Development Network (RWDN) was established in 2016. As a Rohingya refugee, she wanted to empower women and girls from her community by providing a safe space for them to receive education and livelihood skills. They learned to develop products including tassel earrings, reusable sanitary pads, reusable face masks, and a recipe book. Volunteers from other organizations often come to the center and train the women in various capacities to support them to be self-reliant.

Before the COVID-19 pandemic, RWDN actively participated in bazaars and refugee events where they sold their products, and now their products are sold online. Ten women from the community have also gathered and produced a cookbook that contains recipes of traditional Rohingya food from their homes. RWDN women are also contributing to other women groups, especially on issues such as period poverty. The hope is for RWDN to one day be 100% refugee-led where the Rohingya women design, create and sell their products. You can support RWDN by purchasing their handmade products HERE.

Mohammed is the leader of the Somali Refugee Community in Malaysia. He came to Malaysia in 2016 and was elected a leader in 2017. He currently runs the Somali Refugee Community (SRC Center) that oversees all Somali refugees in Malaysia. The SRC Center offers several programs such as access to livelihoods, education, food, and healthcare. In 2019, the SRC Center started a bakery project, Bread of Hope, that aims to teach baking skills to Somali women to earn an income to support their families and the center.

The project aims to teach the women baking skills to earn an income and support the center and their families. The women are trained by a professional Somalian chef with over 17 years of experience. The women are also trained on how to run a home business. SRC is also actively distributing bread to other communities, including the local B40 Malaysian families on the frontline.

Some of the programs they run at the center include a medical center, food aid distributions, education and learning programs, youth and women empowerment programs, sports events, skill and livelihood programs, and awareness talks. One of their successful initiatives is the “Bread of Hope” bakery project. The center benefits from it as the income generated is used to cover utility bills and rent.

From Damascus to Kuala Lumpur: A Journey of Art, Food and Passion

Ramia is a 40-year-old Syrian artist, chef, and mother of 3 boys. Ramia and her family came to Malaysia in 2014 because of the ongoing war conflict in Syria. Ramia graduated from the Arts University of Damascus in 2000 and worked as an art teacher in several schools and colleges before coming to Malaysia.

Due to the laws that don’t allow refugees to work, Ramia could not use her degree qualification when she was looking for employment. So she started a home business with her husband, catering Syrian food and traditional cuisines. She also started doing handmade jewelry & accessories of all kinds and sells them at refugee bazaars and entrepreneurs events. They are known for their delicious and mouth-watering Syrian cuisine, from Maqbula rice, kebab, and shawarma, to baklava, kunafa, and basbousa.

If you live within the Kuala Lumpur/Selangor area, you can support Ramia’s business by ordering items via Whatsapp (+6010 432 3404).

Falafel: A Taste of Home

Khalid is a 53-year-old Syrian chef who arrived in Malaysia as a refugee in 2016 with his wife and three children. Khalid sought employment to help support his family, but no one would hire him because of his age. Without hesitation, Khalid thought of opening a small stall on the streets to sell Falafel, a vegetarian delicacy that may be found on any street corner in the Middle East, particularly Syria, Iraq, Lebanon, Jordan, and Palestine. He started his business on the streets outside his residence in Taman Melati, Kuala Lumpur, two years ago. He wanted to introduce Malaysians to traditional Syrian food, which is nutritious, simple, tasty, and inexpensive. Khalid hopes that one day someone will invest in his business and supply Falafel to more Malaysian restaurants. He also has a dream of opening his own restaurants and selling the best and most authentic Syrian food. You can follow Khalid’s journey on Facebook HERE.

Marzia is a 40-year-old university lecturer from Afghanistan. She fled to Malaysia with her two children due to the ongoing war in her country. She first moved to Malaysia in 2017 and has been helping women in her community ever since. In 2018, she formally launched the Hazara Women Refugee Empowerment (HWRE), a community-based and refugee-led center that empowers and supports Afghan women and children.

Marzia arranges various activities with her team and NGO sponsors, including literacy lessons, food aid distribution, medical check-ups, emergency fundraising, child care, and more. One of the projects developed by HRWE is a sewing program for women and men to learn and earn an income. They sew bags, fabric, clothes, face masks, and much more. Follow Hazara Women Refugee Empowerment – HWRE on Facebook (@HRWE Parsa). You may also contact Marzia via Whatsapp to support her initiative (+60 18-238 9240)

Maedah, or Maya, is an artist from Iran. She came to Malaysia in 2012 with her husband and two children to seek refuge. She graduated from Science University of Mashhad, Iran in 1999, majoring in mathematics programming. She has always been passionate about art but couldn’t pursue it at a younger age due to a lack of family support. She was inspired by the historical places that she visited in Iran and how they used a unique type of art, so she decided to learn Tezhib.

Maedah used to travel to several cities in Iran when she was a teenager. She was fascinated by the designs and architectural styles used in historical and ancient places such as mosques, churches, palaces, and old markets. Since then, she decided to learn the art of Tezhib.

Tezhib means gliding. It is a collection of original design parts that illustrate beautiful religious books, cultural books, poetry collections, and calligraphy. It is used to design royal and historical sites as well as places of worship.

Maedah was trained by several experienced artists, where she learned about their style and sense of art, eventually finding her own style. After coming to Malaysia, she was inspired by the local Batik and merged it with her art designs.

Maedah was also an art teacher at a school in Kuala Lumpur and conducts art classes for anyone interested in learning about Tezhib. She also actively participates in art and gallery shows where she displays her art and tells visitors about it. She enjoys volunteering her time and skills to teach art to refugee children. Her biggest dream is to share the beauty of this art with more people around the world and inspire more people to use coloring and art as a form of self-expression.