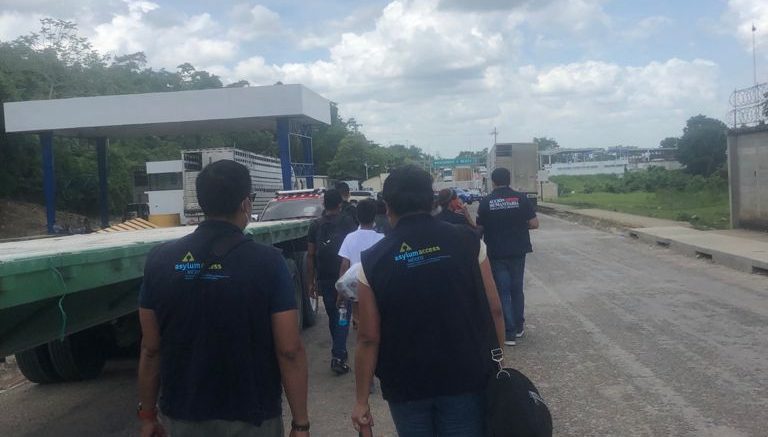 On the border between Mexico and Guatemala, at a crossing known as El Ceibo, the Asylum Access Mexico team works tirelessly to provide legal advice to highly marginalized people. In that border crossing diverse illegal actions by the governments of the United States, Mexico and Guatemala converge.

Between August 5 and August 31, civil society organizations documented 34 flights from the United States to airports in southern (Chiapas and Tabasco) and central Mexico (Jalisco, Mexico City and others), with migrants and people in need of international protection on board.

At dawn, the people were transported by land to the border with Guatemala by agents of the National Migration Institute (INM) and the National Guard. Against the law, they didn’t receive information about the possibility of requesting protection in the country. Asylum Access Mexico has closely watched these illegal and massive deportations, as well as the eventual returns.

At the El Ceibo border point, our team met C.A., A.D. and F.N., Honduran nationals whose physical integrity is at risk in their country of origin and were forced to flee to Mexico to stay alive. After being deported for the first time by the Mexican authorities, they were accompanied by Asylum Access Mexico to the El Ceibo internment point with the aim of submitting two documents: the request for authorization of entry for humanitarian reasons and the request for the recognition of refugee status in Mexico.

These documents, based on the Political Constitution of Mexico, the Law on Refugees and the Migration Law, allow people to exercise their right to request asylum and obtain protection from the Mexican government, including a migratory permit to stay in Mexico. However, the Mexican immigration authorities in El Ceibo refused to receive the documents, arguing that they had to be delivered to the immigration authorities in Villahermosa. Then, they took the people to the detention center in that city.

Even though they expressed their intention to present their asylum application to the Mexican Commission for Refugees (COMAR), the INM authorities did not allow them to do so. This was a violation of Mexican legislation, which establishes that the INM must give COMAR written notice as soon as a person expresses their desire to initiate the refugee status procedure.

On September 6, 2021, Asylum Access Mexico contacted those affected. They stated that, once again, they were deported to Guatemala on Saturday afternoon, under the INM’s argument that “there was no asylum document there” and that “of their own free will they could return to Tenosique to go directly to the Mexican Commission for Refugees, since there (in the detention center) they could not receive any type of document.”

They were not given any kind of documentation and they signed documents that they did not have the opportunity to read. This is the second time that these people have been deported by the INM despite expressing their desire to request refugee status in Mexico.

“We are concerned that the principle of non-refoulement continues to be systematically violated in Mexico. The Mexican government must guarantee access to the asylum procedure in accordance with the human rights treaties and conventions to which Mexico is a party, since it is not consistent with its actions. The INM does not respect or guarantee the protection of people,” said Alejandra Macías Delgadillo, director of Asylum Access Mexico.

The organization’s team has identified that these actions are generalized and block people’s right to request asylum. These actions occur in the context of the illegal and violent acts registered in recent weeks against migrants and people in need of international protection on the southern border.

To stop the expulsions from Mexico to Guatemala, on August 25, Asylum Access Mexico, Foundation for Justice and the Democratic State of Law, Sin Fronteras and the Institute for Women in Migration filed a complaint with the National Commission of Human Rights.

The complaint and the injunctions indicate how the Mexican government carries out illegal deportations that violate the right to due process and asylum, established in national and international legislation. In addition, it does not take into account the best interests of children or a gender perspective, and violates the international principle of non-refoulement that establishes among the signatory states of the 1951 Convention on the Status of Refugees (including Mexico) the prohibition of expelling people in need of international protection to the country from which they escaped and where their lives may be at risk.

Asylum Access Mexico will continue working to guarantee that people in need of international protection have access to their right to asylum, and will continue its advocacy work so that the authorities comply with their obligations.